First a disclaimer. I’m not a meteorologist. I was, however, a firefighter for 34 years, and I spent my fair share of time fighting bushfires over that time.   Bushfires are dangerous and, for all the efforts that people and communities put in to fighting the fires, large scale fires are dependent on weather changes to get them under control. Usually it means doing what you can until the Southerly arrives with its cooler temps and much needed rain.

At the beginning of November, my wife and I flew to northern NSW to visit family. From the plane window we could see first hand what the media reports had been highlighting for the past few days – vast stretches of bushland alight, with spotfires starting up as we flew past. The sheer expanse of the fires struck me immediately. The smoke plumes stretched for hundreds of kilometres. Although I thought it was unusual, I wasn’t overly concerned at the time. The winter had been very dry in Sydney (which was representative of NSW in general) with none of the torrential winter storms that we often get (remember when the Pasha Bulker tanker washed up in Newcastle during a massive storm in 2007?) but my experience was that a Southerly change would soon bust through and bring it’s usual deluge to put the fires out.

Not long after we arrived a Southerly change did blow through, but it wasn’t very strong and it was dry. ‘That’s a bit of bad luck’ I thought. We occasionally have a dry southerly, but everyone who lives on the east coast knows that, by and large, Southerlies carry rain. At least it was cooler to give the crews on the ground some respite.

While we were away from Sydney, two more Southerly changes came and went, with barely a drizzle in them. The fires continued to grow, detroying properties on a massive scale, and taking lives with them. South Coast. North Coast. Blue Mountains. Queensland. It is, properly, a natural disaster, and it’s not over yet. I kept waiting for the Southerly change that would finally douse the blazes.

This week, back home in Sydney, we had another southerly arrive, but it was dry (again). My count of Southerlies with little or no rain in the last month is 9. Nine dry Southerlies. I’ve never seen that, and anyone who’s lived on the east coast would find that statistic extraordinary, and the weather forecast doesn’t give much hope for a drenching in the near future. It will come eventually, but what is the difference at the moment? Why is it happening?

Unlike their name, Southerly changes don’t actually come from the South. Weather changes come from the west, crossing onto the mainland after picking up moisture in the Indian Ocean, and spurred into crossing the continent faster than the earth is spinning by a global Coriolis Effect. The Southerly wind is the forefront of the new weather system moving east across the country. At this time of year the belly of the system hits around Sydney and stretches north. But not this year. This year the belly of the systems, and all the moisture in them, have been pushed further south. NSW is getting only the top edge, with no real rain in it, while at the same time Tasmania is have out of season snow falls.  That’s the reason the fires are still burning on the eastern coast. 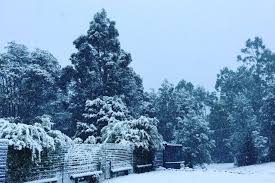 Snow has covered Tasmania over the past few weeks.

SO IS IT BECAUSE THE CLIMATE IS CHANGING?

Well, weather systems changing is just about the definition of Climate Change, so let’s just suck it up and admit that it is. Taking an absolutist position that Climate Change is not occurring puts us in a position of not preparing for what is happening around us. It’s the reason funds to fire services and National Parks were cut. It’s the reason the Prime Minister didn’t jump in a month ago with extra disaster assistance, and it’s cost the country financially and in ways we can’t get back. It’s also the reason that the eastern part of the country is getting dryer while the north west is getting slightly wetter. If we don’t admit that recognising the change in the data should go hand in hand with changing our approach, our rivers will get emptier each year, fire season is going to become progressively worse, and the losses will mount.

4 thoughts on “Is Climate Change responsible for the bushfires? Look to the South for the answers.”